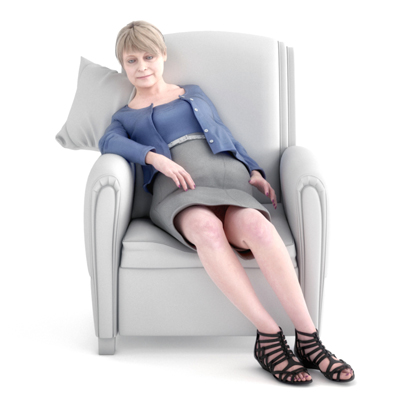 Margaret was an 81 year old lady with a history of pneumonia and had recently suffered a stroke (CVA). She had a high risk of pressure injuries and had developed a red area on her left heel.

As a result of her stroke, Margaret had left sided weakness which created an imbalance in weight distribution and a high risk of pressure injuries. She wore a pressure management boot to protect the red area which had developed on her heel. Margaret previously sat in her old chair for 6 hours each day and preferred to stay in bed as she was so uncomfortable in her chair, regularly taking paracetamol due to her pain and discomfort. Due to this unwillingness to sit up for long periods of time, Margaret, a sociable person, often missed out on various activities which she enjoyed within the home.

Caregivers struggled to position Margaret comfortably within her chair and were aware of the pain she was in frequently, which was frustrating for them. They tried to use pillows for comfort and support, and corrected her posture regularly throughout the day. As well as the pain Margaret was in, she also had postural issues such as a right side pelvic obliquity and a pelvic rotation. Her feet were not loaded nor were her legs elevated, encouraging oedema. Margaret had limited hip flexion on her affected left side which made her assume a near laying position in the chair contributing to the deviations in her pelvis. 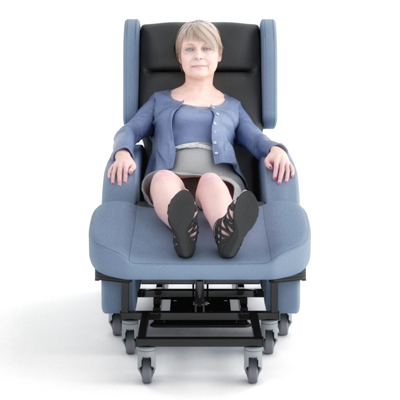 Fortunately Margaret was in the intervention group within the research trial which meant that she benefited from a thorough seating assessment and was matched with seating specific to her needs. Margaret trialled the Atlanta chair which comes with an integrated leg rest which was very useful in reducing swelling on both lower limbs, managing her oedema. Improved postural and pelvic positioning meant she was able to maintain a midline position of her trunk and she was overall much more comfortable, which she delighted in telling everyone! She no longer required pain medication whilst sitting in her new chair.

Because Margaret’s body was fully loaded within the chair, including the feet, her weight was distributed over a larger surface area which significantly reduced her pressure injury risk. The level of pressure management included in the leg rest combined with an elevated position ensured that the risk of breakdown on her heels was minimised.

One of the most pivotal advantages of Margaret’s new chair was the impact on her ability to socialise within the home, and for the first time she attended a religious service that was being held which was very important to her where previously she would not have been able to tolerate sitting out for long enough to attend this service.