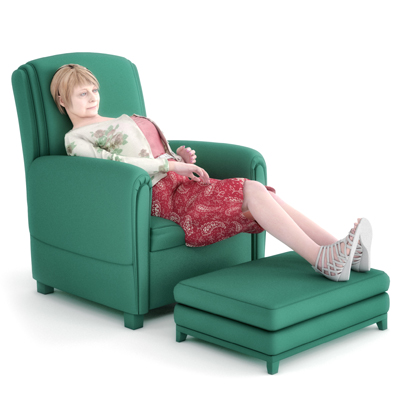 Wilma, 89, had advanced dementia and Parkinson’s disease. Wilma was non ambulatory and had to be hoisted for all transfers.  As a result of her complex needs, getting the correct chair was difficult, but necessary to combat the recurring UTI and chest infections she suffered as a result of poor posture.

Wilma was part of the control group during the research project which meant that she remained in her existing nursing home chair for the duration of the research whilst being monitored by the research team and occupational therapists.

Wilma tried the chair illustrated to the right. This was causing problems as she was continually sliding down the chair and falling to her right hand side which required a lot of ‘postural correction’ by caregivers. Wilma was developing red areas on her sacrum from shearing forces from constantly sliding from the chair, for which she used an extra pressure management cushion, purchased in addition to her chair, which was placed on top of the existing cushion, altering the chair dimensions.

Upon assessment it was confirmed that amongst other limitations, Wilma had significantly impaired hip flexion, which was one of the key factors causing her to slide from the chair. She was also continually slumped to her right hand side which was caused by pelvic obliquity.

This caused additional problems such as, abnormal curvature of the spine, impaired respiration, impaired physiological functioning as well as discomfort and pain.

With the knowledge and resources available to her caregivers, they transferred Wilma to another chair, and purchased alternative pressure management cushions.

Following the 12-week trial period and on reassessment it was found that many of Wilma’s initial problems remained: she still fell to one side, sat in a pelvic obliquity and her feet were still unsupported. The fixed angle of the chair didn’t support her hip flexion which meant she was in danger of redness from ‘sacral sitting.’ The lack of head and neck support contributed to poor posture.

Had Wilma been matched with a recommended Seating Matters Chair the following benefits would be recorded: