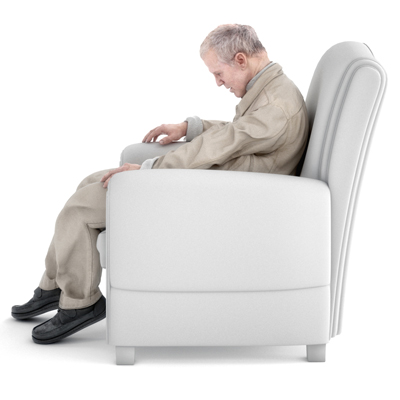 Ben, 87 suffered from CVA/stroke, and had osteoarthritis. Ben had a history of pressure injuries and spent 14 hours per day in his chair. He was hoisted for all transfers.

Ben was part of the intervention group within the research trial which meant that he was assessed and matched with specialist seating from the Seating Matters range.

Ben suffered problems in his old chair, namely little head support, no tilt in space, and he had a fixed kyphotic posture which made it difficult to lift his head or extend his neck. His field of vision was restricted due to the curvature of the neck and upper spine which also led to safety issues when eating and breathing which meant the risk of aspiration was high. He also would slide from the chair often and developed red areas on his sacrum from the friction and shear.  This put an increased burden on the caregivers constantly repositioning Ben. Other postural deficiencies were a pelvic obliquity which caused an imbalanced weight distribution and pelvic rotation to the right as well as a leg length discrepancy.

After assessment a Phoenix chair was recommended for Ben which would improve his postural alignment and reduce or prevent further kyphotic deterioration. Ben told caregivers that he was more comfortable in his new chair and he was able to interact more with others in the room. 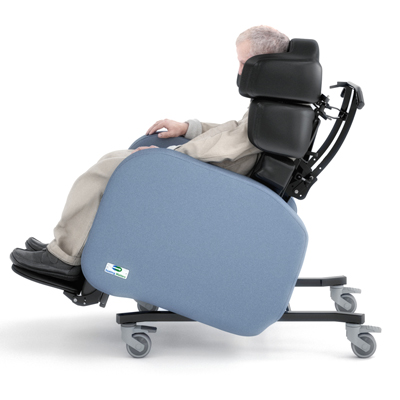 The adjustable lateral, head and shoulder supports, provided essential support for his head and spine. Tilt in space worked in Ben’s favour helping his head and neck into a neutral position over his spine. This also improved Ben’s visual field and was a much safer position for drinking, feeding and respiring. The seating surface was adjusted to suit Ben’s physical dimensions which eliminated the pelvic obliquity and rotation. Functionally, Ben’s chair could now be moved throughout the home allowing him to spend time in different environments safely without compromising posture by transferring into an unsuitable wheelchair. In addition, Ben did not fatigue as easily in this activity and could participate for longer periods of time without becoming tired and strained.