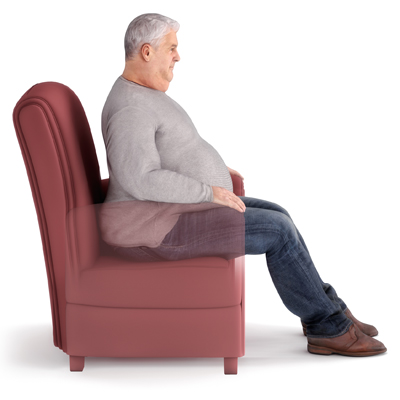 Caregivers reported that Alan spent most of his day in bed because he was too weak to transfer and because there was a high risk to staff and the patient both during transfers as no suitable chairs were available.  When lying in a more upright position in bed, Alan fatigued easily and couldn’t tolerate this position for very long.  Due to his minimal position changes from day to day, he was developing red areas on his skin.  He repeatedly showed low blood oxygen saturation.  Alan had also contracted multiple respiratory infections due to his inactivity and inability to sit upright for prolonged periods of time.

At his initial assessment, it was decided that Alan would trial the Bariatric Sorrento.  The removable arms made it possible to complete a safer transfer with Alan, after which the chair was adjusted to a tilted position.  This initial position was familiar as it was close to the position Alan maintained in bed.  The bottom lumbar cushion on the Bariatric Sorrento was removed to allow Alan to sit right back into the chair and gain support for his upper back, ensuring his full body was loaded in the chair.  This was a challenge before due to a pronounced gluteal shelf.

Benefits of the Bariatric Sorrento

Once in the Bariatric Sorrento, Alan was able to sit upright for hours at a time.  As this was an electric battery operated tilt in space chair,  Alan was able to reposition himself independently, changing positions often and building up his sitting balance throughout the day while redistributing interface pressure.  Alan soon showed an increase in blood oxygen saturation and after a few weeks, the redness on his skin disappeared.  He reported feeling stronger as he was able to sit for up to 7 and 8 hours per day comfortably.  He fully recovered from his respiratory infection and had no signs of having a new one. 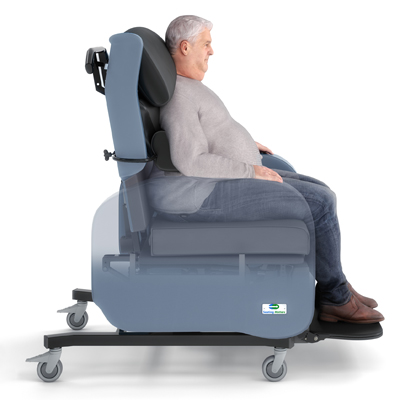 To aid his recovery, he was able to perform a strengthening routine daily with the occupational and physical therapists while still sitting in the chair. After a few weeks, the therapists attempted standing transfers with Alan.  The negative angle leg rest helped him to get his feet into a position that would give him a safe, stable base of support when he reached the standing position and the therapists could also tilt the chair forward into an anterior tilt, assisting Alan to stand.

Alan was then able to perform a standing transfer when returning to bed.  He still needed caregiver help, but this was greatly reduced when compared to the level of assistance he needed prior to using the Bariatric Sorrento.  Caregivers were pleased with his progress and were happy with the reduction in moving and handling risk with transferring Alan each day.  Alan’s posture, core strength and mobility began to steadily improve.

To find out more about our Bariatric Specialist Seating range please click here.