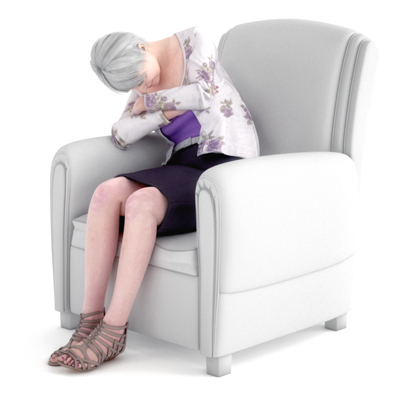 Valerie was an 86 year old lady with dementia and limited mobility. She spent much of the day with her arms crossed to stabilise herself in her chair.

Valerie previously sat in an standard wooden frame chair commonly used in many nursing homes and she used this chair for approximately 8 hours per day. Some of the problems with her chair included, it was too wide, the back height was too high, the armrests were too high and too far away from her body. The chair did not provide her with support and she tended to be slumped forward which significantly limited her communication, interaction and visual field. Valerie didn’t communicate much throughout the day and had difficulty completing minor tasks independently such as eating and drinking due to the position of her folded arms and hands.

Valerie’s caregivers assisted in feeding her but worried about the risk of choking due to the position of her head, and they reported that her motivation for feeding was quite poor. They also noted that during transfers Valerie would be quite stiff and her range of motion, especially in her upper limbs was restricted. The constant leaning to the side caused postural issues and an imbalance in her weight distribution which increased the risk of pressure injury.  If not corrected this posture could cause a scoliotic deformation of the spine. Breathing and digestion of food was also impacted by this posture.

Following intervention, Valerie’s needs were assessed and she trialled a Seating Matters Sorrento chair. Immediately a difference to Valerie’s postural alignment was recorded. As a result of using tilt in space and changing position of the centre of gravity, Valerie was able to maintain an upright head position with little exertion or strain. She was able to use the arm rests for support and positioning which helped her to maintain a midline position of her trunk and head. Tilt in space also enabled Valerie to distribute her weight through both sides of her pelvis. 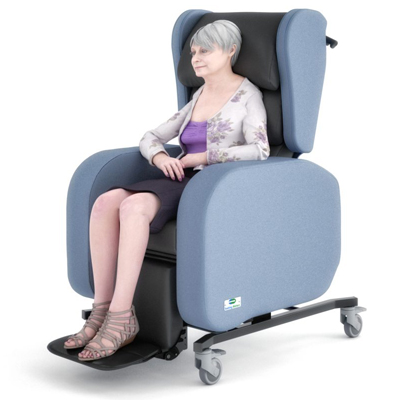 This led to Valerie communicating more, and being more alert and responsive through the day. Because her head was now upright and in midline position she was at much less risk of choking or aspirating. Over time, as Valerie felt more secure, she began to use the armrests and as a result of feeling more secure and stablilised in her correctly adjusted chair she no longer crossed or ‘fixed’ her arms and was able to reach out to drink a cup of tea and eat independently.

She no longer leaned heavily to one side and as a result her pressure risk reduced and her pelvic positioning improved. The tilt in space function improved comfort and posture and also distributed weight evenly throughout all contact areas. By tilting the chair as shown in the image below, weight was redistributed from underneath Valerie’s sacrum and ischial tuberosities and spread throughout her back and other load bearing areas.